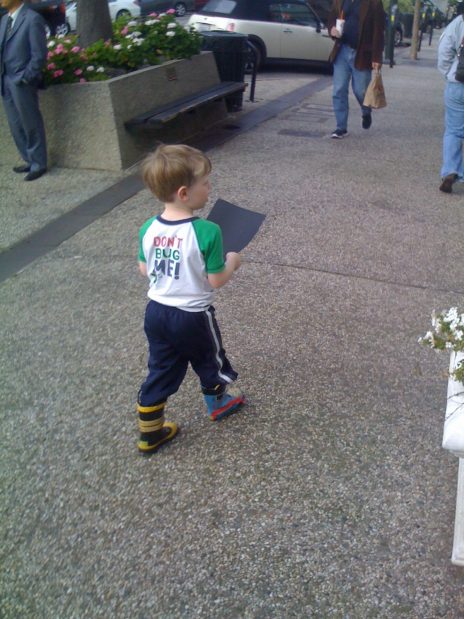 Posted at 15:27h in News and Updates by Sandy Dean

So, I know there’s probably not a lot of people reading this, but that’s ok.  Cuz I’m just a Dad letting go of all those little battles in life that add up to one big crazy one.  Where time flies fast and you don’t have time to catch your breath until you have that one, teeny-tiny quiet moment like this… that moment where you step back and suck in the early morning chill – cuz you’re out to get coffee at 7am on a Sunday morning.  But you don’t mind cuz its finally, blessedly quiet… you’ve given up on the battle to have MATCHING BOOTS.  Or worrying about a SHIRT BACKWARDS.  I don’t remember what he’s carrying, but I do remember it was vitally important and there was no way he was letting it go.

So walking down the street at 7am on Sunday without any more struggles was a complete relief.  In fact, in this moment, I was able to reflect and think “aww what a cute kid”.  I was no longer angry that I had missed out on yet another morning to catch up on sleep.  And to be honest, I think this was a few years in… so I had come to grips with the fact that I would NEVER catch up on sleep!

Plus, this was far better than showing up at Safeway at 5:45 in the morning with a sleepless kid – hoping to appease him with a donut – only to realize they don’t open  ’till 6am!  Nope, the grocery store is NOT open 24 hours.  That’s yet one more of those things I learned after I had kids.

Speaking of early mornings, I also remember meeting neighbors at 4:45/5am that I never even knew I had!  Pushing around a stroller was the only way our oldest would stop crying… this was typically Dad duty… cuz by then, Mom was bushwhacked.  Getting outside, breathing the fresh air, and finally ending the wailing was always a blessing.  Tiredly waving to that previously unknown neighbor is now becoming a foggy memory.  Where am I going with this?  I guess I’m thankful to finally be able to sleep a little more… so to all the parents out there who know what I’m talking about – hang in there!  It may take years (or in our case, years and years!) but eventually you’ll be able to look back and reminisce about your kid wearing mismatched rubber boots and a backward “Don’t Bug Me!” pj shirt at 7am on a Sunday morning.  And oddly enough… you’ll remember it fondly.