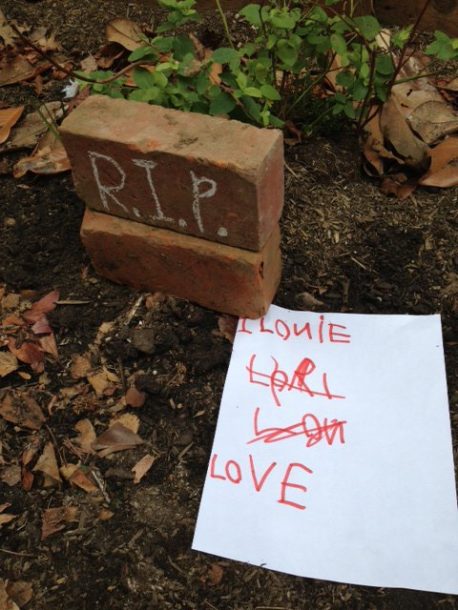 Posted at 16:21h in News and Updates by Sandy Dean

As I realize the cats’ litter box hasn’t been scooped in over 2 weeks(and we have 2 cats!), I think its time to let all our pets know – they’re STILL LOVED!  I wanted to share this picture of a sadly humorous memorial for Bluey, the Betafish.  When he passed away, there were tears and tears… and tears.  But honestly, in life, Bluey was lucky to be fed.  We were trying to teach the kids to be responsible and we bought Bluey saying “ok.  But you’re gonna have to feed Bluey every day.”  And of course, the boys where “YES!  And I’ll clean his bowl, and I’ll give him treats!”

As parents, we’d give gentle reminders and many times we’d step in to remember the feeding.  But as parents, we’re awful busy – so sometimes Bluey would go without feeding for a few days.  This isn’t why he died though.  Bluey had a good life.  I think he lived almost 2 years, which isn’t too bad for a Betafish.  I’m just reminiscing about how the pets seem to get a lot more love in the beginning and at the end.  Like a full-on brick memorial right outside our back door!

But at the end of the day, the pets are really loved.  Mazy, our dog, gets plenty of love.  And the dog and the cats love to sleep with the boys… even though Mazy’s not allowed in the bed!   Ultimately, as I think we all know, its Mom and Dad left holding the poop bag though.  (mainly Dad)  Scooping poop really isn’t the fun part of pets.  Have I written poems about this??  Of course.  Including a poem about my mission to swap out a dead pet fish for a live one!  But you’ll see that later …  In the meantime, the kids have gone off to school … … and nobody fed the dog.