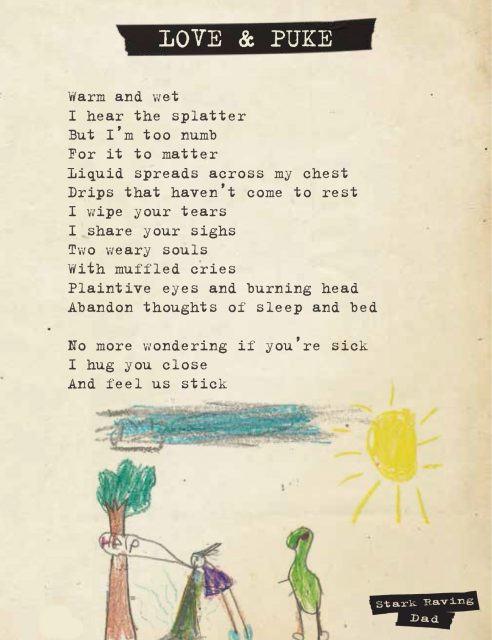 I’m learning a lot as I head into the 2nd week with STARK RAVING DAD on book store shelves.  Probably the biggest is that the word “poems” scares a heck of a lot of people.  It’s so hard to get them to see past the idea of organized verse, even when the prose is disguised as irreverent, parenting, potty humor!!  However, when they actually DO read the poems – I’ve gotten a lot of chortles, joy, and people telling me they’ve “laughed out loud”!  That’s such a great feeling.  It’s an even better feeling when people tell me they’ve lived through all of these – and that they totally “felt” each of these captured moments.  I’m so thrilled to know that my “misery loves company” parenting poems are reaching people.

However, sitting on the Barnes & Noble “Father’s Day” table doesn’t mean shoppers are going to crack that cover and look inside.  That word “poems” is still staring at them.  Sadly, I realize, it’s a lot like trying to get your kid to eat some new food.  No matter how you try to package it – awesome, amazing, tasty, gift from the gods, died and gone to heaven, etc. –  they’re not willing to risk a bite.  It’s gonna take some friend, some trusted confidante, who’s gonna vouch for it as “good”.  Lord knows – Dad and Mom can’t coerce the kids.  But that friend, with just a word, can change everything!

Wait!?  Where am I going with this?  I guess I’m hoping people will take a chance on my book… then hopefully share their experience with friends.  I’ve actually posted this poem here because it too captures a bit of my dilemma.  There are a few people out there who are a bit put off by “puke”, especially by being puked ON.  Yup, it gets some visceral reactions.  But this truly happened to me picking up my son while he was sick.  And I remember being totally grossed out, but at the same time, holding my kid tight – I really felt the love.  He was so miserable.  I was so miserable.  But at that moment, there was no where else I wanted to be.  Basically, getting past the idea of the icky stickiness… you realize there’s something pretty cool happening there.  I guess that’s kind of a deeper thing than you probably got out of the poem!  But just beyond all that stickiness … it’s there.  You just gotta find it.  Or hopefully a friend will tell you about it.

If you’re reading this – please don’t be afraid of the word “poems”.  My book is all about “moments”, real parenting moments, hopefully captured with humor and honesty.  And yeah, sometimes they can be kinda gross.  And yeah, it is poetry.  But hopefully you can find the funny and the fun… and share it.  Thanks for listening to me rant.