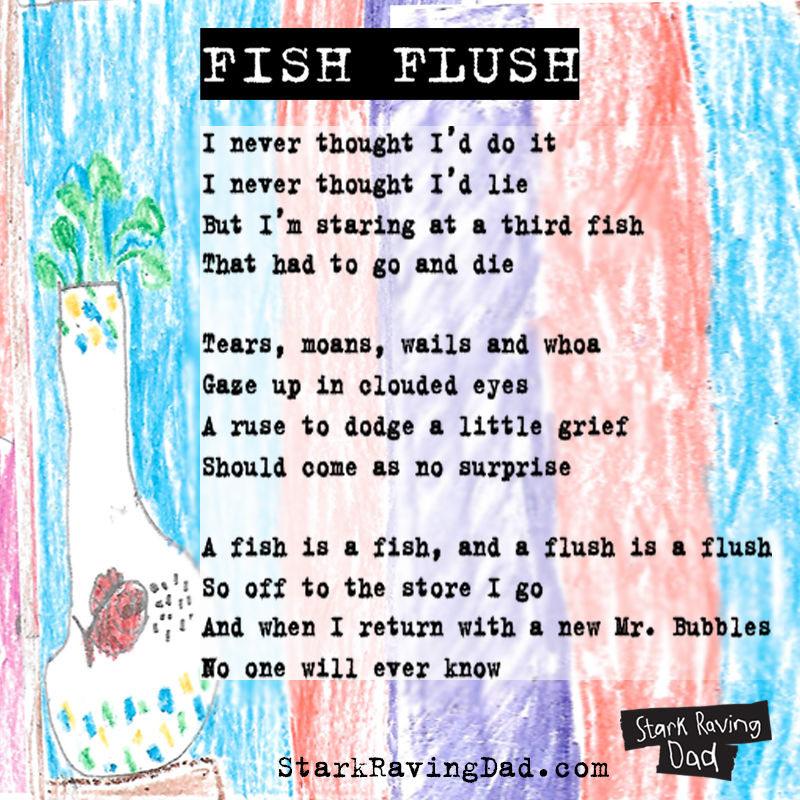 Oy!  So here’s a poem I wrote about flushing my son’s fish, then replacing it with another without telling them.  I’m not really proud of it.   So I thought in this post I could kind of explain my rationale.  Some of it is in the poem… like the part about the 3rd fish to go and die.  Yes, that’s true.  But the whole story is that each of my boys had a fish.  But my younger son’s fish was always the one that seemed to die.   And not long before this “incident”.  Our cat had been run-over and killed.  (yeah, heavy stuff)  After the second fish died, my younger son looked up at me with teary eyes and moaned “why do all my pets die??”  AND this was before the run-over cat!   SO when I was staring down at this glassy-eyed dead fish in his bowl – you know I was NOT looking forward to telling him.

Thus, the trip to Petsmart for a replacement fish was hatched.  I did get approval from my wife.  Who also agreed – she couldn’t face our younger son, and tell him he had another dead fish.  Yes, it worked.  Although I bought a fish that was a little too red apparently… his was more blue.  But I explained it away as his fish was probably going through some changes… growing up kinda thing!

Now, I know very few people read this.  But this is the thing I’ve learned about parenting.  It’s hard as hell.  Flushing and replacing a fish is actually one of the easier things… more or less.  I’m still not entirely comfortable with betraying my kid’s trust.  BUT today i’m gonna let loose on another thing entirely.  Both my boys have a undisclosed reading/school disability.  (my wife does not want me to share even that, so i’m just burying it in this tirade)  And now we’ve moved from the challenges of daily life – getting dressed, brushing teeth, cleaning rooms – to the challenges of schoolwork.  Let me tell you… its hard.  Since the very first day of parenthood, its been hard.

Now, what I’ve discovered – is the challenges just keep changing.  There is no magical ending.  They don’t suddenly hit an age where you just stand around and be proud.  Although I’m very proud of all my boys have accomplished, there’s still a TON of work.  We’ve been dealing with VERY late nights of schoolwork – and tears.  Both my wife and I have been tag teaming, because we’ve also had our “real” work to deal with.  My book is still the sideshow to my “real” job, so that’s been pushed even later.  Needless to say, no one’s been getting much sleep.  Everyone is stressed.  And everyone is cranky.  I’m actually starting to wonder if this may be why I have a book of poems… my wife told me to do something constructive with my angst… and there was a whole heck of a lot of angst!

This is a problem we’ll work through.  We’ve worked through everything else.  It’s just another hurdle thrown into the marathon race of parenting.

So what does this have to do with flushing fish?  Well, I guess nothing and everything.  There is never an easy choice as a parent.  Everything is a challenge, and you weigh all the options against each other, and hopefully pick the right one.  I realize there’s no “Daddy Manual” because there’s never really a right or wrong in parenting… just the angst of wondering if you’re completely messing you kid up for life.  (and you won’t know that until its too late!!)