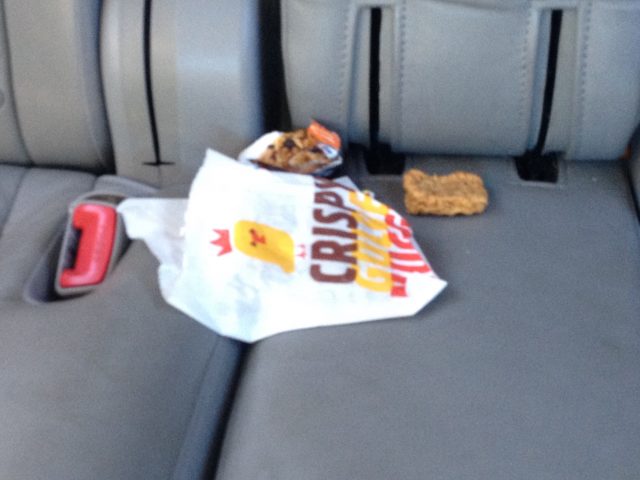 14 Aug BARE NUGGETS IN THE BACKSEAT!

Posted at 15:00h in Uncategorized by Sandy Dean

Maybe I should be writing a book called “Crap That Makes Dad Mad”!  These chicken nuggets were left in the back seat during a recent heat wave.  I found them when I climbed back in the car in the morning. (yes, it smelled like the back kitchen of a KFC!)  Seriously!!?  I was so mad I actually took a picture.  Then, I haven’t had time – so its taken me weeks to post.  But now that i’m posting it – I’m still mad!  Maybe the book should be called “Where My Garbage Cans at?!  Holla!”

Seriously, this isn’t the first time.  It just backs up a theme you may have noticed… kids not picking up the simplest of items – ever!  I guess i’m whining again.  Or ultimately, I’m conducting research… at what point will my kids start to pick up their wrappers, clothes, soccer balls, shoes, socks, and chicken nuggets?  So far my study seems to be leading to this conclusion – NEVER!

I think this may all be stemming from the fact that its summer. The kids are home.  And the chaos seems to be a general constant.  Just like the ice cream drips all over my front stoop.  But school starts in a week, so I know things will probably re-gel into a more regulated form of chaos.  That means – before 8:30am and after 3pm!

For now, I’m just happy to say – I should be delivering final revisions of STARK RAVING DAD to Running Press tomorrow.  And so far, things seem to be running along relatively smoothly.

So, I think the saying goes “Don’t sweat the small nuggets” or something like that.  But my humble suggestion is that you check your back seat for any fast food items before you lock it up in a heat wave.