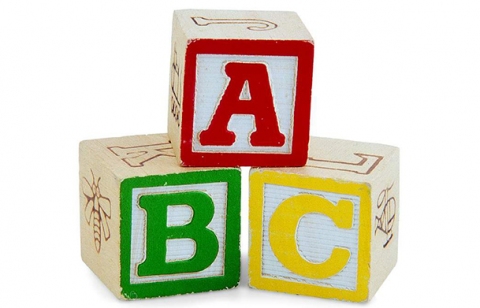 What is the hardest thing in the world?  Well at 2am, in the dark, its one of those small wooden blocks painted with a letter!!   I wrote this poem the day after stepping on one.  And frankly, I was AMAZED at how much it hurt.  It probably didn’t help that i was very tired, and very grumpy.  I quickly learned my lesson – you should turn on the light before you wade through the mine fields.  Of course, at that time, I had completely forgotten that our living room was a danger zone.

I do remember trying not to scream (the kid was asleep finally!!) and boy did I want to scream.  That little brightly colored block hurt SOOOO much.  And I’ve stepped on tacks, nails, glass, sharp rocks… you name it… but this one was the winner.

THE HARDEST THING IN THE WORLD

If you’ve ever stepped on a small, square block

It’s more than a shock

Your jaw will lock

To stifle the scream, and whimper instead

Why did I get out of bed?

Emblazoned brightly with an “A”

Nestled near an apple

Impassionedly I have to say

This prose won’t make the cut.  But it was definitely inspired by Dad’s pain – as most of my poems are.  I suppose we should have made him clean those blocks up.  And frankly, we tried.  But ultimately, it was one too many battles for a day… and that was one battle we lost.

Then Dad paid for it.  (and I haven’t forgotten!)