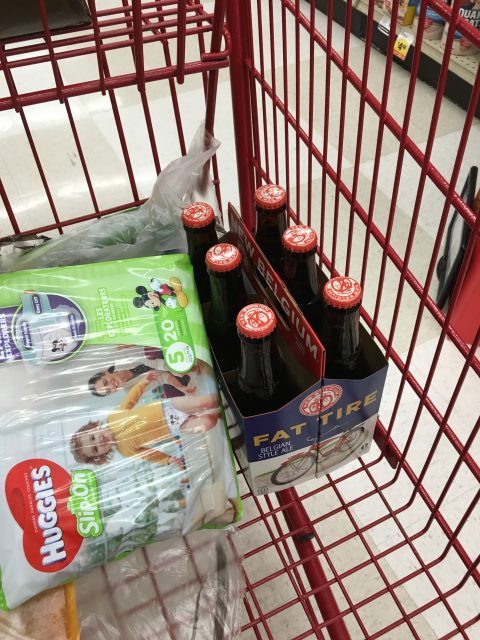 Posted at 21:10h in News and Updates by Sandy Dean

I thought it would be important today to highlight some helpful tips for the new dads out there.  Of course, we all know, fatherhood can be quite a shock.  Lack of sleep, lack of time, lack of silence – it all starts to add up into a continuous cacophony of panic and confusion.  Luckily, I thought of this while my wife sent me to the store this weekend…

So — for you new dads — there will come a day… or probably night… when you’re asked to make the dreaded diaper run.   And oddly enough, you won’t mind at all.  Because you’ll finally have a  moment of silence!  You’ll be able to drive to the store in the quiet, and it will be bliss.  But then, you’ll realize at some point – while you’re staring at the never-ending aisle of diapers – that you have to check out with these diapers.  And THAT does not look manly. (obviously, you’ll get over it.  After all, you have kids.  And pretty soon you won’t care at all what the world thinks.  But for right now… you’re still holding on to your last ounce of “manliness”)  Now, here’s my tip!  Grab a six pack of beer, or 12pack, case, whatever – just get beer.  (*see pic above)  Why?  Because beer is manly! and it negates the sissy-diaper-buying appearance that, at this point, vexes you.  Honestly, throwing beer in your cart solves a lot of problems.   Not only does it look like you’re ready for a party, but it looks like you can handle the kids too!  Nothing says “hey, i’ve got this baby crap under control” like a six-pack of beer and bundle of diapers.  That’s right – nothing can stand in your way.

However, if you’re still sheepish about buying the diapers.  You can always throw in a pack of smoked brats!   So now, it looks like your ready for a tailgate and hey, maybe someone will change a diaper.  But it won’t be you!! (or maybe it will, but this is all about appearances!)  (*see 2nd pic) 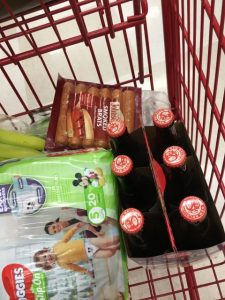 Lastly, and this is important – in your completely sleep-deprived, you may be be inclined to hum the 80’s muzak tune playing in the supermarket… DON’T!   This completely negates all your efforts with the beer.

Sadly, once you get home, half a beer will put daddy right to sleep.  But not the baby!  Never the baby!